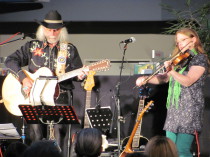 From Irish folk through Country to Rock’n’Roll

A musical and historical roundtrip from Ireland, across the USA and back to Europe.

Traditional Irish folk music has a significant influence on the evolution of modern pop music. Driven by the harrowing plight of the 1845 to1849 potato famine years, three millionout of a total eight million Irish people emigrated to the USA and Canada, bringing with them the music of their home country. For many, however,this didn’t mean salvation, but doom- a journey into death, or into the unknown at a the very last. Some of the ships that left Cobh, the seaport of Cork, rose to a sad fame such as the “Titanic”.

The comparison of dances and songs justifies regarding Anglo-Saxon and Irish music as the foundation of the North-American folk music. Furthermore in 1860 there were 3,5 million slaves living in the southern US. The influence of black and European music on the American music is indisputable. In the period between 1900 and 1930 black and white music styles shaped each other. World War II caused several racist barriers to fall, especially in the army which in turn led to a change of heart in the civil population. The cradle of Rock’n’Roll is Memphis / Tennessee where black blues merged white folk and Country music create the roots of Rock’n’Roll.

In the 1950s blues, country.music and above all, Rock’n’Roll came Europe. On the old continent these musical styles soon grew very popular and progressed to new levels. At the beginning of the 60s beat and a new variety of rock music emered;they became the origin of contemporary pop music

This two hour show, presented by three bands, aims to give an impression of the route taken by music to grow into the styles loved by millions today.

The Trailriders (American Folk and Country)

Since October 8th 2014 all tickets were sold out.